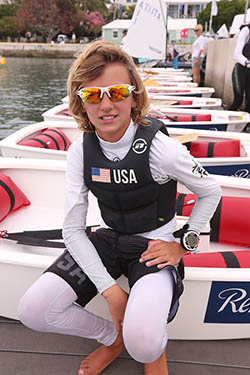 Stephan Baker of the U.S. won the 16th annual RenRe Junior Gold Cup. The 14-year-old Baker, from Ft. Lauderdale, Fla., dominated the regatta with the low score of 14 points and finished 20 points ahead of Bermudian Christian Ebbin.

Baker has been almost untouchable on the Optimist circuit. He currently holds the title of overall winner at the South American and North American Championships, the Mar Del Plata regatta, the Orange Bowl regatta and the 2018 USA Optimist Team Trials along with the title of 2017 US National Champion. He was fourth in the 2017 World Championships in Thailand as well.

“The atmosphere and the water temperature make it really nice to sail here,” said Baker. “I liked sailing in the heavier winds. It was tough but nice and I enjoyed it. It just worked out.”

Two sailors competing in the Argo Group Gold Cup, Taylor Canfield of the U.S. and Nicklas Dackhammar of Sweden, are past participants in the Junior Gold Cup.

“The Junior Gold Cup is an awesome event,” said the 29-year-old Canfield. “It’s one of the pinnacle events for Optimist sailors around the world because only the best sailor from each country can enter, it’s sort of a mini world championship and it helps out the local Bermudian fleet. It drove me to continue with the sport as a career.”

“The best Opti memories I have are sailing the Junior Gold Cup,” said the 27-year-old Dackhammar.

This year’s fleet counted 35 sailors from five different continents, including 23 Bermudian sailors. It included Matt Ashwell of South Africa, the first entrant from the African continent, and the largest field of female sailors both locally and amongst the overseas competitors. Females are here from Argentina, Germany, Great Britain, New Zealand, Spain and the U.S. Virgin Islands.

The German sailor, Cosima Schlueter, placed sixth overall and was the top-placing female.

The youngest competitor from overseas was Mose Bellomi from Italy, who at home is in the cadetti fleet (under 11) and by Italian requirements is not allowed to sail in their selection trials due to his age yet is in the top half here amongst his world class competitors.