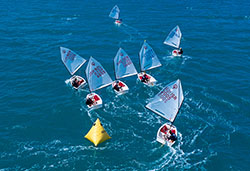 HAMILTON, Bermuda (Aug. 3, 2020) – With great regret the Royal Bermuda Yacht Club announces that the 18th annual RenaissanceRe Junior Gold Cup has been postponed to 2021 due to the novel coronavirus COVID-19 pandemic.

First held in 2002, the RenaissanceRe Junior Gold Cup brings together male and female sailors aged 12 to 15 from around the world for a multi-race series in the Optimist dinghy. The regatta was founded as a means to give Bermuda’s youth sailors a taste of international competition, and it has proven valuable in forging lasting friendships as the international sailors are housed with Bermudians.

Given the importance of social distancing in preventing the spread of COVID-19 and the various travel restrictions that are in place around the world, the decision was made to forgo this year’s event. The obstacles proved too challenging to warrant inviting 15 to 20 teenagers to Bermuda given the uncertainty surrounding the pandemic. 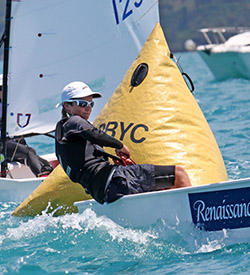 Rush, the 14-year-old from the Wakatere Boating Club, previously competed in 2017 and placed 13th overall. This year he stormed out of the gate, won three of the first four races and never looked back. Rush finished with the low score of 32 points in the 12-race regatta and had the championship wrapped up before the final race on Hamilton Harbour.

“It feels great to win,” said Rush at the awards ceremony. “When I got here, I didn’t expect to win. And then after the first day I thought it was possible.”