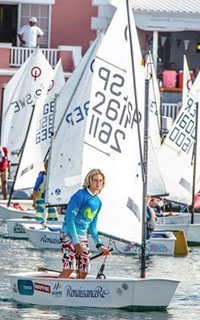 In a sport that’s traditionally dominated by boys, it’s becoming more common to see girl sailors on the water. That fact is no more apparent than at the RenaissanceRe Jr. Gold Cup. The Organizing Authority has made special allocations to ensure that 25% of the invited competitors are female. With girls achieving sailing success all over the world, it has not been difficult to find those accomplished females for this special invitational.

Mia Nicolosi, age 12, from the US Virgin Islands is proving that the girls have come to compete. She’s had two great days on the water. On day one, she finished third overall and after a bullet in her first race on day two is now in fourth place overall after 8 races. She’s no stranger to Bermuda, having competed here in 2013 for the North American Championships. Her older brother, Teddy Nicolosi, was also invited in 2013 for the Junior Gold Cup where he finished 7th overall. Her competitive spirit might very well have been encouraged at home - when asked if her brother gave her any tips for the race, she politely said no, but added “my goal is to place higher than he did!” With how she’s been sailing, that outcome is certainly possible.

Nicolosi’s hostess, local Leyli Walker is also familiar with having inspiring sailors in the family. Her father, Blythe Walker, is one of Bermuda’s most recognized sailors. Having competed in the Barcelona Olympics in 1992, he is also competing in this year’s Gold Cup, marking his 12th appearance this regatta. Blythe’s father, Jordy Walker, has been credited with rekindling the Gold Cup by introducing fiber-glass IODs to the fleet and reinventing the format of the long standing regatta. With a rich familial history in this special event, Leyli age 11, is excited to be a part of her third Jr. Gold Cup. Since her first appearance, she’s climbed the ranks each year, hoping this year will be no different.

The Regatta Co-Chair, Dede Cooper, in her 8th year running the regatta says, “it’s great to have these talented girls here in Bermuda highlighting the potential for our local female sailors to recognize that they can compete at a high international level and be right in the mix with the boys”.

Newcomers Fair Well On Day One Of Racing

After a wet and thunderous start to the day, the race committee decided to hold the first races of the day in the Hamilton Harbour in case a another squall should blow through. Once the weather settled a bit the fleet moved further out to Granaway deep to finish the day completing five races. Spain’s Davila and Norway’s Berthet reported unexpected shifty winds in the harbour and more consistent conditions in Granaway. Although the weather made for challenging races, both sailors were very pleased with the warm water temperatures.

While Duff felt the waters were colder than his home of the British Virgin Islands, the level of competition also impressed him. “There are a lot of countries represented with a lot of competitive sailors. It feels like I’m at the Worlds Championships – the top of the pack is the same level of talent.”

Light winds are forecasted for day two of racing. This may lead to longer wait times and the possibility of a long race day on Saturday. There are 7 more races scheduled with the final race in Hamilton Harbour on Sunday. -- Christina Sgobba

Danish Optimist champion, Christian Spodsberg, has returned to Bermuda this week to defend his RenaissanceRe Junior Gold Cup title sailed in Optimist dinghies. Since his victory last October, Spodsberg has continued to rack up an impressive record which includes an 8th place finish at the IODA World Championships, a 2nd at the Lake Garda Meeting and a victory at the Danish National Championships. It won’t be an easy sail for Spodsberg as he finds himself in a competitive field of 45 local and foreign sailors. The foreign contingent consists of 16 sailors invited from 14 countries and includes the National Champions from Argentina, Denmark, Germany, Ireland, Norway, Switzerland and Sweden. The sailors from the British Virgin Islands, Holland, New Zealand, Poland, Spain and U.S. Virgin Islands also have impressive resumes which is necessary criteria to warrant the coveted invite from their national authorities to come to Bermuda. Four of the invited sailors are also female.

The Bermuda Optimist fleet benefits greatly from the influx of top sailing talent. For the local sailors aged 10 to 15, the regatta provides world- class competition in their home waters, an experience usually found only by traveling to a continental IODA event. The regatta allows Bermuda’s young sailors to instantly see where they sit on the international stage. Local coaches have an eye on a number of Bermuda sailors expected to give the invited guests a run for their money including RBYC veteran Campbell Patton and Bermuda National Champion Tayte Stefaniuk from the RHADC.

RenaissanceRe has generously sponsored this event for the last twelve years, providing financial support to assist with airfares for the invited international sailors, providing them with charter boats, on-the-water coaching and equipment required for competition. The visiting sailors stay with local sailing families, another important aspect of this unique experience.

Twelve races are scheduled to be sailed from Thursday October 8th through Sunday, October 11th, mostly in the Great Sound. The final race will be sailed in Hamilton Harbour on the Argo Group Gold Cup course just prior to the finals in front of the large spectator fleet.

More info and results at www.juniorgoldcup.com 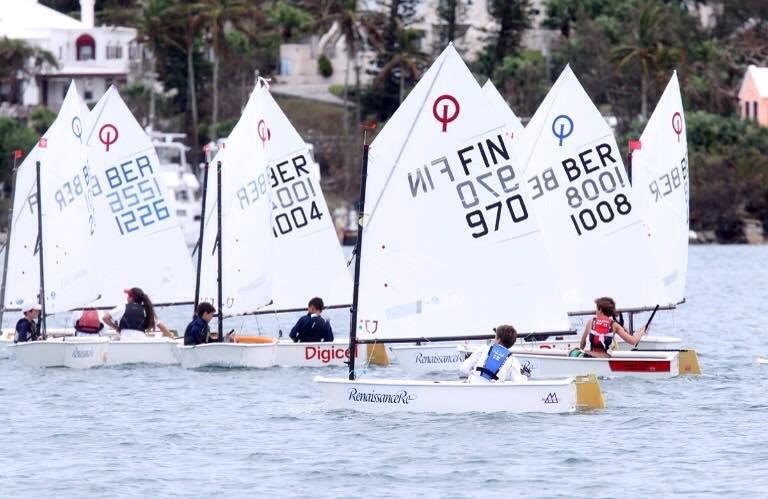 The RenaissanceRe Junior Gold Cup, now in its 13th year, has become a critical pathway for Bermuda’s Optimist sailors seeking international competition and top level experience. The regatta brings the world’s best Opti sailors to their doorstep and allows the local sailors to instantly see where they sit on the world stage. The RenRe Junior Gold Cup has become the breeding ground for local match race sailors both in Bermuda and overseas. This includes 2014 World Match Race Champion Taylor Canfield, who got his first taste of match race sailing while in Bermuda attending the Junior Gold Cup from USVI.

RenaissanceRe has kindly sponsored this event since its inception, providing the support to assist with airfares for the international youth sailors and providing them with charter boats, on-the-water coaching and equip- ment required for competition. The visiting sailors stay with the local families of our youth sailors which is another important aspect of this unique experience. For the local sailors aged nine to 15, the regatta provides world- class competition in their home waters, an experience usually found only by traveling to a continental IODA event.